Breaking Down Barriers to Care 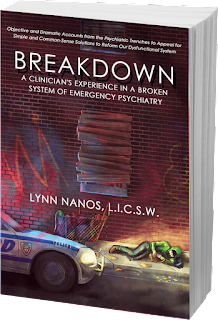 Do you have a family member with a severe mental illness? Are you a professional who helps people with serious mental illness? If so, you probably noticed that the mental health system is deeply flawed. I wrote the newly published book, Breakdown: A Clinician’s Experience in a Broken System of Emergency Psychiatry (available for purchase at all major online stores), to appeal for legislative reform because it's nearly impossible to change the system within the trenches of clinical work.

Breakdown traces key events in the history of the mental health system: factors that contributed to the mass closing of hospitals, the dramatic decline of inpatient lengths of stay, and the narrowing of civil commitment criteria. Detailed case vignettes demonstrate interactions between patients, their families, police officers, and other mental health providers as they navigate a path toward reducing and preventing danger. Yet, the system limits their ability to help, as too many patients end up homeless, jailed, harming themselves, harming others, or even dead.

Overly restrictive inpatient commitment criteria often result in only the sickest of the sick getting admitted to inpatient units. Breakdown compares the civil commitment criteria of Wisconsin and Massachusetts. While Wisconsin considers recent psychiatric deterioration and the need for treatment to prevent further deterioration that could result in danger, Massachusetts does not. In other words, Wisconsin aims to prevent danger while Massachusetts does little to nothing to prevent it. Consequently, patients rapidly cycle to and from both inpatient units and hospital emergency departments, as well as to and from jails and prisons.

When patients with serious mental illness are not in jail or hospitalized, crisis can occur anywhere. Breakdown shows where patients can be evaluated to determine if they meet inpatient criteria: Lily - who traveled from Maine to Massachusetts because she was ordered by her voice, a spirit called "Crystal," to make the trip - is at an outpatient agency that focuses on homelessness; Antonio - who delivers insects to his neighbors' homes to minimize the effects of poisonous toxins that he says exist in their homes - is at his apartment; Owen - foul-smelling, oddly dressed, barefooted, and unable to stop talking - is in my office; Dante - who repeatedly calls the police with complaints about “someone” who attempted to kill him - is at the police station; Jon – who is suspicious of the FBI - is at a homeless shelter.

Administrative pressure to reduce hospital emergency lengths of stay can result in premature discharges. Without proper treatment, symptoms worsen, and readmission to emergency services is inevitable - if they do not inflict serious injury on themselves, others, or get arrested first. While the inpatient lengths of stay have declined since deinstitutionalization, the readmission rates to inpatient units have increased.[1]

As a result of the combination of limited inpatient beds and inpatient admission units’ refusal to accept some of the most challenging cases, patients languish for weeks in hospital emergency departments before placements become available. Those most prone to violence, most likely to get stuck for months on inpatient, or without health insurance inevitably wait for treatment the longest. Breakdown recommends that these inpatient units be held accountable and face consequences for this type of discrimination.

Meanwhile, patients who fake the need for care are smoothly and swiftly moved to inpatient settings. This population occupies precious and limited bed space and wastes health care resources. Malingerers pretend to be sick for secondary gain, that is, a hospitalization or a crisis unit stay. Although the most common reason for this is to secure Three Hots and a Cot (Chapter 11) because of homelessness, other reasons exist. For instance, they might have just encountered a drug-deal-gone-wrong and now are in danger of getting killed, thus need to hide out. Or, they might want to build a case to try getting financial benefits from the government.

Another commonly encountered group in emergency services involves patients with borderline personality disorder. Their danger involves being most at risk for accidentally killing themselves. I usually do not grant inpatient admission to the patient who desperately wants this, but hasn't engaged in severe self-injury recently and doesn't have a suicidal plan. On the other hand, I ensure that the patient who swallows an object besides food or medication, such as a pen cap, gets transferred to safe confinement.

For people with psychosis who lack awareness of being psychotic, brain deterioration often occurs long before enough psychiatric treatment is obtained. Even after treatment has been sought, it can be difficult or impossible to alleviate the damage already done. Breakdown closely examines Assisted Outpatient Treatment (AOT) as a means of preventing danger. At a glance, this helps a subset of the population with serious mental illness who are not adhering to their recommended outpatient treatment plans. It involves court-ordered adherence to outpatient treatment plans, without forcing medication upon anyone. The evidence in favor of it uniformly shows that it reduces rates of homelessness, incarcerations, violence, poor self-care, and hospitalizations. Yet, Massachusetts, Maryland, and Connecticut are the only states that do not allow AOT, even though the 21st Century Cures Act helped to normalize it and alleviate its controversy.

When I testified in favor of AOT at the Boston State House on July 17th, 2017, most of the opposition came from peer specialists who referred to themselves as "survivors with lived experience." To be a peer specialist, one must only have experience with being diagnosed with mental illness, or have been traumatized in some way, or have experienced what they refer to as "an extreme state." At the hearing, I was stunned at their arguments. Instead of identifying mental illness as pathology originating from the brain, they berated psychiatrists for labeling people with psychiatric diagnoses. Instead of referring to auditory hallucinations as being a sign of mental illness, they promoted the notion that hearing voices not there is simply an extreme state of altered reality. Instead of indicating that psychosis is brain-based, or that no one knows the cause of schizophrenia, one person who testified expressed her belief that trauma caused her to become psychotic. Instead of pointing to the limitations of the Rogers authorization (enabling forcible administration of antipsychotic medication by mental health professionals) in the community, another person testified that the "Rogers monitor is already forced outpatient." Another one said that "forced medication is expensive and addictive." Instead of promoting the spread of respite programs that at least administer medications to very ill people (many of whom would otherwise not take these on their own), they requested that more peer-run respite programs arise. The belief that mental illness doesn't exist runs amok throughout their teachings. Yet, the state government financially has funded this group for years.[2] Breakdown delves into how this group operates and asks the government to discredit them.

The current system didn’t get this way overnight. Flaws stem from deinstitutionalization that began in the 1940s. Civil commitment laws in many states are overly restrictive. Inpatient lengths of stay are too short for those who need this most. There is a shortage of inpatient beds. Malingerers must be shown the exit door. Borderline personality disorder is a serious mental illness that warrants just as much attention as bipolar disorder. Discrimination by inpatient units against the most challenging cases must end. Antipsychiatry has no place in government-funded treatment. AOT is a sound evidence-based tool that is widely underutilized.

The greatest expression of passion for a cause is to educate others about it and request legislative reform. Although most mobile psychiatric emergency cases have involved mentally high-functioning patients, I’ve been most invigorated from helping the most impaired patients, usually suffering from psychosis. They are grossly under-served in both the mental health and legal systems. Breakdown is dedicated to this population.